Download the full game script and accompanying presentation slides below.
To be enjoyed over video conferencing!
Also doubles up as a drinking game! (Please drink responsibly!)
6 - 9 Players (Aged 18+)

Instructions: This Murder Mystery party is designed to be played via video chat (ideally with a share screen feature for the presentation slides).
Game Keeper will download the content and share scripts with each character at the start of each round, only the Game Keeper will have the full script and know who the killer is.

Important: I have masked the final sections for obvious reasons.
Please don’t spoil the game for others, and please share with your friends if you enjoy!

House Rules:
Don’t cheat by reading ahead or downloading the script if you are not Game Keeper.
Don’t spoil the game for others.
Drink responsibly.
Have fun!

Feeling Creative? You can add clues and characters.

Drinking Game:
Drink each time Belinda blinks, each time boobs, willies and sex toys are mentioned.
Extra drinks for every time the victim’s name is mentioned. 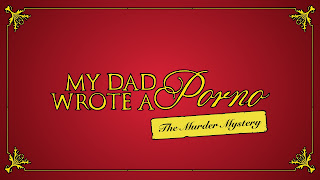 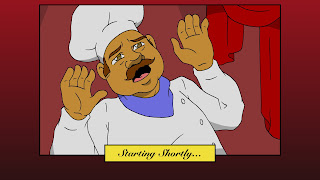 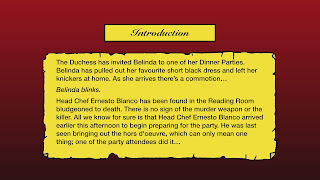 Introduction:
The Duchess has invited Belinda to one of her infamous Dinner Parties.
Belinda has pulled out her favourite short black dress for the occasion and left her knickers at home. As she arrives there is a commotion…
Belinda blinks.
Head Chef Ernesto Blanco has been found in the Reading Room bludgeoned to death. There is no sign of the murder weapon or the killer. All we know for sure is that Head Chef Ernesto Blanco arrived earlier this afternoon to begin preparing for the party. He was last seen bringing out the hors d'oeuvre, which can only mean one thing; one of the party attendees did it… 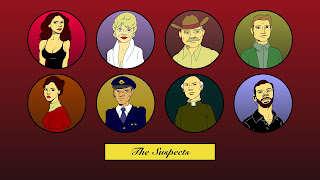 Round 1: The Party Attendees aka The Suspects

Belinda Blumenthal - I am Belinda Blumenthal, International Sales Director of Steele's Pots and Pans. I was invited here by my dear friend, the Duchess, or as I call her, My Lady. I only just arrived so it cannot be me.

The Duchess - I’m the Duchess of Epsom. This is my dinner party, why would I want a murder to take place here? It was supposed to be a lovely evening with delicious food. Good, wholesome fun for everyone!

Jim Sterling - I’m Jim Sterling, CEO of Sterling Corp. I heard Belinda was coming and I wanted to make sure I was here. It’s been a while sweet cheeks!
Belinda blinks.

The Youngish Man - Recently promoted from Horse and Jockey night receptionist to Ritz manager, I have come to the party to head up the waiting staff. I was really looking forward to working with such a renounced chef. What a waste?

Rita Kokkino - I’m Rita Kokkino, royalty from Greece. I’ve been a close friend to the Duchess for many years. I was in town visiting a lover so I thought I’d swing by. I’ll be honest, I wasn’t a fan of the rude, little chef man.

Duke Clarence of Epsom - I’m often out of town for one of my wife’s gathering but tonight I made the effort. What a terrible turn of events? I’ve never known this happen before.

Reverend Nigel - I’m Reverend Nigel. People often say I’m over-powering and dogmatic at times. But that’s because I trust in a higher power and I am certain that by the night’s end the killer will be caught. The Lord sees all. 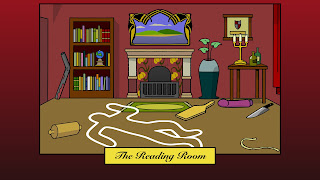 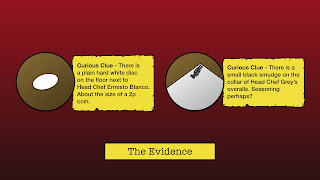 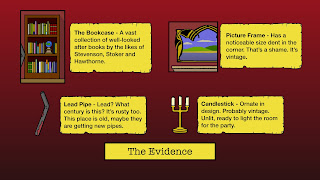 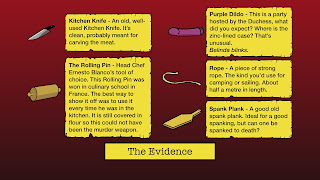 Round 2: The Crime Scene

Curious Clue - There is a plain hard white disc on the floor next to Head Chef Ernesto Blanco. About the size of a 2p coin.

Curious Clue - There is a small black smudge on the collar of Head Chef Ernesto Blanco’s overalls. Seasoning perhaps?

The Bookcase - A vast collection of well-looked after books by the likes of Stevenson, Stoker and Hawthorne.

Picture Frame - Has a noticeable size dent in the corner. That’s a shame. It’s vintage.

Lead Pipe - Lead? What century is this? It’s rusty too. This place is old, maybe they are getting new pipes.

Candlestick - Ornate in design. Probably also vintage. Unlit, ready to light the room for the party.

The Rolling Pin - Head Chef Ernesto Blanco’s tool of choice. This Rolling Pin was won in culinary school in France. The best way to show it off was to use it every time he was in the kitchen. It is still covered in flour so this could not possibly have been the murder weapon.

Rope - A piece of strong rope. The kind you’d use for camping or sailing. About half a metre in length.

Spank Plank - A good old spank plank. Ideal for a good spanking, but can one be spanked to death? 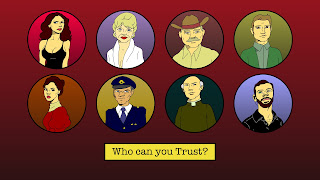 Round 3: Who can you Trust?
(Suggestion: This can be recorded ahead of time with some grainy video filters to imitate Police Interview Tapes. Helps everyone get into character and makes for fun viewing.)

Belinda Blumenthal - Everyone was already in the Reading Room when I arrived. My Lady looked the most distressed, understandable, someone has just been killed at her party.

The Duchess - I was, of course, the first one here. I was out giving a snack to Toffee Apple Chew before the party began. By the time I got back everyone was here, except Belinda. She was the last to arrive.

Jim Sterling - I was the one to discover the body of Head Chef Ernesto Blanco, I cried for help and Rita Kokkino arrived. I just came back from the little boy’s room.

The Youngish Man - I was hoping to impress Head Chef Ernesto Blanco, I feel like it had been going well. When I came to the Reading Room with more trays he’d already been killed. The Duchess arrived just after me, then Belinda.

Rita Kokkino - I think I was one of the first to arrive but nothing really stood out to me. I saw The Youngish Man heading to the kitchen before all the commotion. I believe Jim Sterling was the one who discovered the body.

Duke Clarence of Epsom - My wife went to give Toffee Apple Chew a late evening snack so it couldn’t have been her. Plus I know my wife.

Reverend Nigel - The Duchess, Duke Clarence, Jim Sterling and Rita Kokkino were all first to the party. They all seemed to muttering but were all surprised at the scene. Now I’ve done some praying and the Lord gives me the sense that the rusty pipe is not the murder weapon.

Smallish Man dressed in Black - There was a loose cable in the audio system and took me a while to fix it. I got to Reading Room just after Jim and Rita. 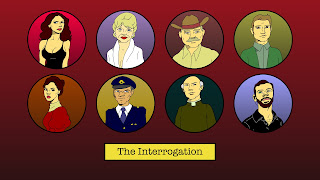 Round 4: The Interrogation
(Each character can be asked one of two questions. All other players will vote which question to ask. Be careful, there may be a crucial detail missed if the wrong question is asked.)

Belinda Blumenthal -
What do you know about the evidence? The spank plank definitely belongs to My Lady. She asked me to spank her with it last Monday!
Why did you come to the party? I do as My Lady asks. I am her servant ever since she won me fair and square at the Tombola.

Jim Sterling -
What do you know about the evidence? My gun is missing, but it’s not in the room.
Why did you come to the party? Why, Belinda, of course. She gets the blood rushing with her big, ripe breasts. I can’t wait to have her lids devour me.
Belinda blinks.

Rita Kokkino -
What do you know about the evidence? Personally, I think the frame got dented when Head Chef Ernesto Blanco hit it as he fell to the ground, which means something else was the murder weapon.
Why did you come to the party? It’s an annual event and I get to see my friends, and eat some delicious food. That’s not going to happen now.

Reverend Nigel -
What do you know about the evidence? I think I saw a gun on the floor on my way in, outside on the path. Otherwise I don’t know anything about any of this. I wasn’t involved.
Why did you come to the party? It’s an opportunity to spread the word of God, and there are sinners everywhere. 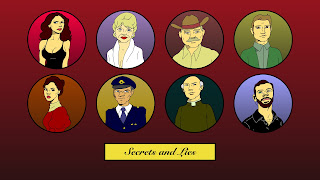 Round 5: Secrets and Lies
(Each character will choose a statement, it could be brutally honest or a terrible lie.)

Belinda Blumenthal -
Secret: I once had a night of passion with Head Chef Ernesto Blanco. He came away a loyal Steele’s customer. I came away unsatisfied, sexually - of course.
Lie: I was late to the party as I was finishing up a big deal.

The Duchess -
Secret: My husband has not been able to excite me for a while.
Lie: I was so excited to see my husband’s party trick with the rope.

Jim Sterling -
Secret: The dent in the Picture Frame was not there when I first arrived.
Lie: I was smooching with Rita, she was very impressed by my new manhood!
Belinda blinks.

Reverend Nigel -
Secret: I turned to God after committing sins when I was young. They still haunt me…
Lie: The Lord tells me the Killer made it seem as though they were late.

Smallish Man dressed in Black -
Secret: I think I heard the impact sound of the killing. It wasn’t wood.
Lie: I have somewhere to be. 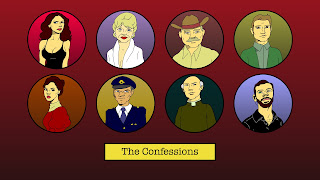 Round 6: The Confessions Round
(Each character will confess something, honest.)

Belinda Blumenthal - I was late trying to find My Lady’s love eggs. I should really return them.

The Duchess - I am sick of these Dinner Parties. It was a ploy to get my husband and Belinda in the same room. I want Belinda to teach him the real ways to excite me.

Jim Sterling - I’m no longer flaking and want to prove myself to Belinda!
Belinda blinks.

The Youngish Man - My new girl suggested I attend, get myself under the eyes of such a renowned chef.

Rita Kokkino - I know it can’t possibly be Belinda, unless somehow he magically got here earlier.

Duke Clarence of Epsom - I’m jealous of Belinda and her connection with my wife! There I said it!

Reverend Nigel - I’ve always believed the voices I hear were the Lord but recently I’m not so sure.

Smallish Man dressed in Black - Sure it’s good money, but I was secretly hoping to see Belinda.

Suddenly [Insert whichever character Rita Kokkino named in Round 5 - without stating this instruction] chokes and splutters. Their wine seems to have been poisoned. They will no longer be able to guess the killer. 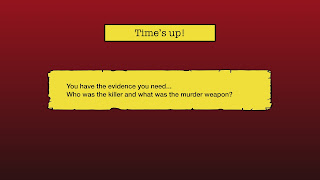 Time’s up! You have the evidence you need. Who was the killer and what was the murder weapon? 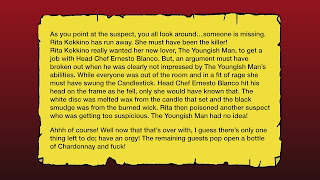 Once they have all chosen:
As you point at the suspect, you all look around…someone is missing. Rita Kokkino has run away. She must have been the killer!
Rita Kokkino really wanted her new lover, The Youngish Man, to get a job with Head Chef Ernesto Blanco. But, an argument must have broken out when he was clearly not impressed by The Youngish Man’s abilities. While everyone was out of the room and in a fit of rage she must have swung the Candlestick. Head Chef Ernesto Blanco hit his head on the frame as he fell, only she would have known that. The white disc was melted wax from the candle that set and the black smudge was from the burned wick. Rita then poisoned [Insert whichever character Rita Kokkino named in Round 5] when they were getting too suspicious. The Youngish Man had no idea. 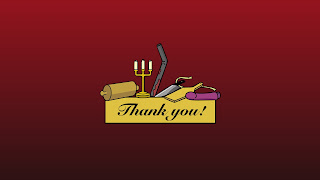 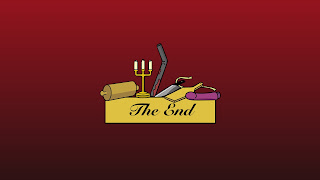 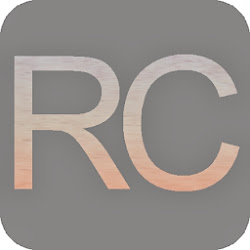 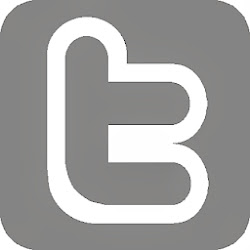 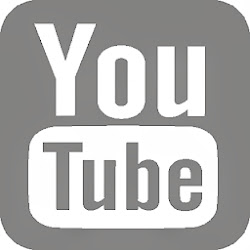 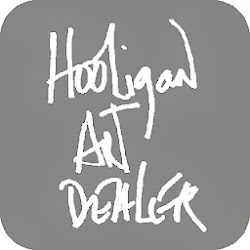